32 years ago I met Sharlene. In intermediate school. Mrs. Teramoto. I think we both thought the other was alittle uniquely off. I was probably weirder. We still probably think that way. The only difference is that we love each other a whole lot more today. We joke that we have to stay friends forever because we'd be really horrible enemies... too much take it to the grave stuff. But, the truth is I don't know what I'd do without Sharlene. I don't want to know what that would be like. We've watched each other grow and evolve and be seriously neurotic through some seriously shitty shit. Shar and I don't cry around each other too much but we know we could if we had to. Mostly, we laugh and laugh and laugh. We have 32 years of private jokes. The best part is the music. We've been making music for not much shorter than we've been friends. The first song I ever wrote was for Sharlenes' 16th birthday-- well, I had the help of our friend David Ho... man the key for that f'n song was too high! And, I don't remember it at all. Today, we're still doing it. You can tell we've been singing together for a long time. It's a good vibe and I'm so grateful. Anyhoo, I have a hard time being sappy with Shar (and my sister). I don't know why. So, I'll end here. Except to say "Thank you for the awesome 32-year joyride, baby! I love you... Faithie
Posted by FaithieJ at 4:48 PM 25 comments: 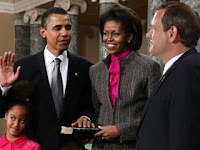 Tuesday was a hell of a day for America. It's astounding at how far we've came as a nation. I don't necesarily feel as individuals we have evolved that much, but when you put us altogether we seem to have transcended something.

It's rubber meets the road time for Mr. President. I always say, "Well, we know he can talk, let's see what he can do." And though I have not even been a fan of his talk, I, too, am unable to repel the spell that is Barack Obama.

So, I stand with all of my fellow Americans and allow myself to feel hopeful and optimistic and send him the best energy possible so he can do his job. His time has come, he deserves this chance and we will all "serve at the pleasure of the president".

Okay. As I've admitted in previous posts, I did not vote for Barack Obama. I also said I was open to his ideas and his presidency. I still think he'll be fine. BUT, this open letter to his kids in Parade Magazine... it's a little thick... a little too much. Have you seen it? Behold the great man's words:

"...And I realized that my own life wouldn't count for much unless I was able to ensure that you had every opportunity for happiness and fulfillment in yours. In the end, girls, that's why I ran for President: because of what I want for you and for every child in this nation. "

Really. He was thinking about his kids and the nation's kids and that's why? PUH-LEEEEZE! He says that like running for president is an option for every parent out there. UGH! I can't even think straight, he sounds so flippant.

Don't get me wrong, I'm still hopeful, but I'm also glad that in case there is more of this type of shit, I can still say I didn't vote for him.