The Things We Don't Know or Teach Anymore...

You know what, I have a whole list from saying "please" and "thank you" to not knowing the proper way to introduce people... doooo yoooooooouuuuu know how to properly introduce people? If you don't http://en.allexperts.com/q/Social-Etiquette-Good-2570/Introduction.htm should help. Anyway, the list is long.

But today, I'm going to talk about behavior more basic than good manners. You know what's peeved me yesterday, today and almost everyday? That I go to the bathroom at work and everyday there is someone on my floor THAT- DOESN'T- WASH-THEIR- HANDS- AFTER- THEY- ARE- DONE- WITH- THEIR- BUSINESS. U-G-H! EEEEEWWWWW! YUCK!

I sit there and someone comes in takes a piss or a crap and then-- they just walk out. Sheeeeeeeeeeiiiiiiiiiiittt! HOW can people exist that don't flush the toilet?!?!?!?!? I mean, I'm almost speechless except for my gag- reflex in full swing now.

And the OTHER group: The DIRTY-MESSY-NO-MY-MAMA-NEVER-DID-TEACH-ME TO TUUUUURRRRN-AROUND- TO CHECK-THE-SEAT-IN-CASE-I-MISSED- PEOPLE. How do you walk out of a stall that you just left your shit all over? How did you not even get it in the bowl? The toilet seat covers that don't go down because your piss has them stuck to the seat. That's your bodily fluid, you touch it, don't leave it for the next guy. Geez!

You know what? I'm traumatized. If you've experienced this, YOU should be traumatized too! But what do I do? Should I say, "Hey, dude, wash your hands, man!" or "Get back her, lady and flush good, for heavenssake!"

I'm going to be sappy and serious today. My blog. I get to be.

Anyhoo, isn't "life is too short" the biggest cliche? Isn't it the most overused cliche? Yes to both questions. BUT isn't that cliche also the most sobering one when we are faced with it?

Today, I will watch someone I love very much say goodbye to someone she loved very much. They hadn't spoken that much over the years. Doesn't matter. The only thing that matters today is that they ran out of time to love each other. I have a friend I hadn't spoken too in years. Ended horribly. Luckily, I had a chance to re-connect after over 20 years of silence. I'm not running out of time.

Look, I'm not saying seek out all your old friends and 12-step them, have them move into your life again, name your children after them... I'm saying to figure out who is really significant to you then, now and forever and tell them. Tell them enough so that if you never see them again, you're both at peace. You both know where things stand. One of the biggest questions people ask when someone checks out of the planet is: "You think they knew how I felt?" or "You think they knew I loved them?"

I like to call it being in completion. It means leaving no doubt in a persons mind that you loved them. I have people I haven't seen in 10 years that would know I loved them if I croaked tomorrow. I can fight with my sister and if I suddenly wasn't around, she'd know I loved her, even if the last thing we did was fight.

Who do you love? Who is a big part of the person you are today? Who contributed to your success? Who loved you when no one else did? Reach out. Tell them. Love them.

Aloha Pumehana, Eileen Anne Mata (Policar)... your life was seriously too short...at least for your earth-bound friends.
Posted by FaithieJ at 7:26 PM 7 comments: 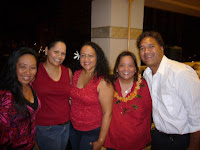 Got some things on my mind. Gonna do some ranting...

My band, after one year at the same place, has just lost our gig. Severe bummage! Budget cuts. Everyone has recession on the brain. Valid arguments. BUT, I don't think it's that. I think it's Karaoke. For my old friends, you need not read any further. I've been offering up my theory for YEARS to my poor friends. You know how Al Gore was talkin' global warming since college? Since waaaaay before "An Inconvenient Truth"? Yup, that's me and my "Karaoke Killed Live Music" conspiracy theory.

Back in the day, live music was KING. You couldn't walk into a bar without live entertainment. And then, to be a musician... whoa! Can you say Gene Simmons?!?!?! Musicians were KING!

Then came karaoke in the 80's. I have no idea of the history of karaoke. You can look on Wikipedia--it's there, I checked.

Anyhoo, crappy mikes, a sound system with massive reverb (that's echo-- covers up the sh**ty vocal skills) and key adjustment capabilities(that's higher and lower-- when you cannot reach the notes) and plays vocal-less music tracks. When you possess these things you have everything you need to ruin a perfectly good song for anyone listening to you... for ALL time( if you don't happen to be someone who can sing). Sometimes, when a musician/singer listens to a bad karaoke rendition of a favorite song, it can bring on a near bout Post Traumatic Stress Syndrome. My special karaoke song that I can NEVER listen to again, BTW is the CLASSIC: "Neither One of Us", by Gladys Knight & the Pips. sniffle.
So, as I was saying: 1) Live music was King 2) Musicians were King 3) Enter Karaoke. Here's 4) More profitable to establishments. $1 per song, plus booze, plus more songs because of more booze, plus more booze because of more songs... it's a cycle and a racket.

As a business major, I get the theory. You're going to make more money catering to 100 Joe Schmoe's that will each drink $100 worth of booze, while they each sing 10-15 songs, while garnering their 15 minutes of fame, than paying a band $300-400 dollars for two hours of solid music--and for alot less effort on your part. See, I am a numbers person. But the bottom line is that over time, the value of and respect for the true musician has dwindled to almost nothing because now many non-musicians think they are musicians. And then, it's all about money now. My bandmate also plays with another band. They play for 4-1/2 hours and her take is $60.00. She is waaaaaay too talented to make only $60 for over 4 hours. That is a deeeeeeeep love for your craft, your passion.

Musicians are certainly not the respected breed we once were and that lack of respect shows up in the paycheck, the ability to find a place to play, and lower concert attendance in some cases.

"Maybe you guys sucked", you say? LOL. Always possible, but I doubt it. And I know... karaoke's not evil, it's fun. I know that. I dabble in it m'self occasionally. I'm just saying that much like the way Starbucks has changed the palette of the coffee drinker to crave "the bite" and not be able to appreciate a smooth, full-bodied cup-o-joe, Karaoke has changed the ability of people to distinguish between singing for fun and singing because if you don't, you'll die. 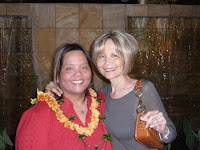 Happy Birthday Ms. Charlotte! I can't even tell you how much I enjoy you! You make me laugh, you make me cry, you make me beg you put clothes on before you go to the store. You make me proud that you're 63 and aren't even close to looking your age. I think secretly every kid is happy when their parents are hot. Dayaaaaaam, mama-san, you-look-good!

I am not like other people. I never start ANY new year promising to diet... or maybe quit smoking... although I did-- but not because I verbally declared it. Basically, I ran out of smokes and just didn't buy any. I haven't bought any for 4 months. Anyway, as I was saying, I usually have no new year resolutions, except this year, I had 1... you know what I'm going to say, don't you... yes, to blog more often. Heh. How am I doing so far? Double heh.

Actually, I would have had so much content had I not been so lazy. Life moves entirely too fast. I don't even know where to begin. So, I guess anywhere is good. And forgive me if I catch you up very UNchronologically.

Alright, first up: My 1st trip to New York. Dec 2007. In ONE hyphenated word? Sensory-overload. That is a city with aLOT of stuff going on at once. Man, we call Hawaii the melting pot, I think it's actually New York . They do the melting pot thing different there. In Hawaii, the locals like to re-train non-locals to the local style and ways. And if the non-locals don't learn it, then there can be some trouble. In New York, no one seems to trying to change anyone. Everyone just wants the space to do their own thing, whatever that thing is.

Anyway, here's a link to quite a few photos. I really had a great time.